The StG 44 (Sturmgewehr 44, literally "storm (or assault) rifle (model of 19)44" was an assault rifle developed in Nazi Germany during World War II that was the first of its kind to see major deployment and is considered by many historians to be the first modern assault rifle.[5] It is also known under the designations MP 43 and MP 44 (Maschinenpistole 43, Maschinenpistole 44 respectively), which denote earlier development versions of the same weapon with some differences like a different butt end, muzzle nut, shape of the front sight base or with an unstepped barrel, all only visible with close inspection.

The rifle was chambered for the 7.92×33mm Kurz[3][6][7][8][9][10] cartridge. This shorter version of the German standard (7.92x57mm) rifle round, in combination with the weapon's selective-fire design, provided a compromise between the controllable firepower of a submachine gun at close quarters with the accuracy and power of a Karabiner 98k bolt action rifle at intermediate ranges. While the StG44 had less range and power than the more powerful infantry rifles of the day, Army studies had shown that few combat engagements occurred at more than 300 m and the majority within 200 m. Full-power rifle cartridges were excessive for the vast majority of uses for the average soldier. Only a trained specialist, such as a sniper, could make full use of the standard rifle round's range and power. 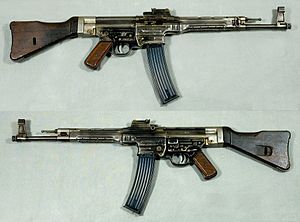