The Model 24 Stielhandgranate was the standard hand grenade of the German Army from the end of World War I until the end of World War II. The very distinctive appearance led to its being called a "stick grenade", or a "potato masher" in British Army slang, and is today one of the most easily recognized infantry weapons of the 20th century.[

The stick grenade was introduced in 1915 and the design developed throughout World War I. A friction igniter was used; this method was uncommon in other countries but widely used for German grenades.

Section of the Stielhandgranate Model 24.

A pull cord ran down the hollow handle from the detonator within the explosive head, terminating in a porcelain ball held in place by a detachable base closing cap. To use the grenade, the base cap was unscrewed, permitting the ball and cord to fall out. Pulling the cord dragged a roughened steel rod through the igniter causing it to flare-up and start the five-second fuse burning. This allowed the grenade to be hung from fences to prevent them from being climbed; any disturbance to the dangling grenade would cause it to fall and ignite the fuse. 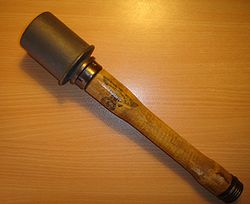