The Panzerfaust (lit. "armor fist" or "tank fist", plural: Panzerfäuste) was a cheap, single shot, recoilless German anti-tank weapon of World War II. It consisted of a small, disposable preloaded launch tube firing a high explosive anti-tank warhead, and was operated by a single soldier. The Panzerfaust was in service from 1942 until the end of the war.

To use the Panzerfaust, the soldier takes off the safety, aims, and, with a little squeeze, fires the projectile. Unlike the Bazooka or Panzerschreck, the Panzerfaust did not have a trigger. It had a pedallike lever near the projectile that would ignite the propellant when squeezed.

In urban combat in the late war in eastern Germany about 70% of tanks destroyed were hit by Panzerfäuste or Panzerschrecks. The Soviet forces responded by installing spaced armour on their tanks from early 1945 onwards, despite it being easily removed by exploding shells or Panzerfaust hits. Each tank company was also assigned a platoon of infantry to protect them from infantry-wielded anti-tank weapons. 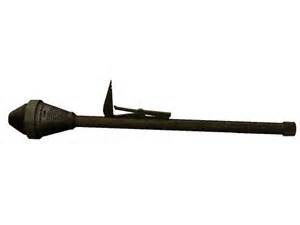